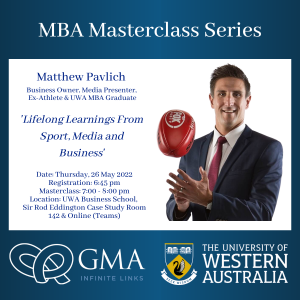 Fremantle’s most respected and admired player in its history, Matthew Pavlich was long regarded as one of the AFL’s biggest stars.

He starred in a number of roles for the Dockers over his 17-year career, becoming the first WA based player to play over 300 AFL games. Matthew was a six-time Doig Medallist as Fremantle’s Best and Fairest player and was named as an All-Australian six times including in the midfield, fullback, half forward and full forward.

Appointed Captain at 24, he captained the Dockers for a record 9 years which sees him ranked 6th all time for games played as an AFL Captain.

Off the field Matthew obtained both a Bachelor of Science and an MBA from University of Western Australia while he was playing. He also completed a 3-year tenure as the AFLPA’s President and a member of their board of directors (9 years). During his career he also spent time on the AFL Laws of the Game Committee.

He has been a brand ambassador for a number of corporate organizations and is now embarking on a blossoming career with Fox Sports and Channel 9.

Matthew also has a number of business interests including PMY Group, Lumin Technologies and PickStar.

Matthew is married to wife Lauren and they have three young children; Harper, Jack and William.

Matthew is a sought-after speaking talent given his vast experience within the AFL industry, tertiary education, and his burgeoning business experience. He opens up on his various anecdotes from his 17 years in the game focusing on dealing with failure and adversity, operating a high-performance culture, the importance of diversity and inclusion, team dynamics, feedback, values and behaviors and leadership.

This Masterclass is available in hybrid mode, both online via Teams (a link will be emailed to you after registration when numbers are finalised) and at The UWA Business School for those joining us in person.